Constant evolution
Wake up and sleep
Jolt yourself awake
Ancient, seen eons of time,
Live in rivers flowing
Like a light in the dark
The silver disk of the moon, the careful watch
of an eye above the blackest depths.
Not of a monster,
but of change
Possibility lurking under the surface
lying in wait to wake
and take its prey. 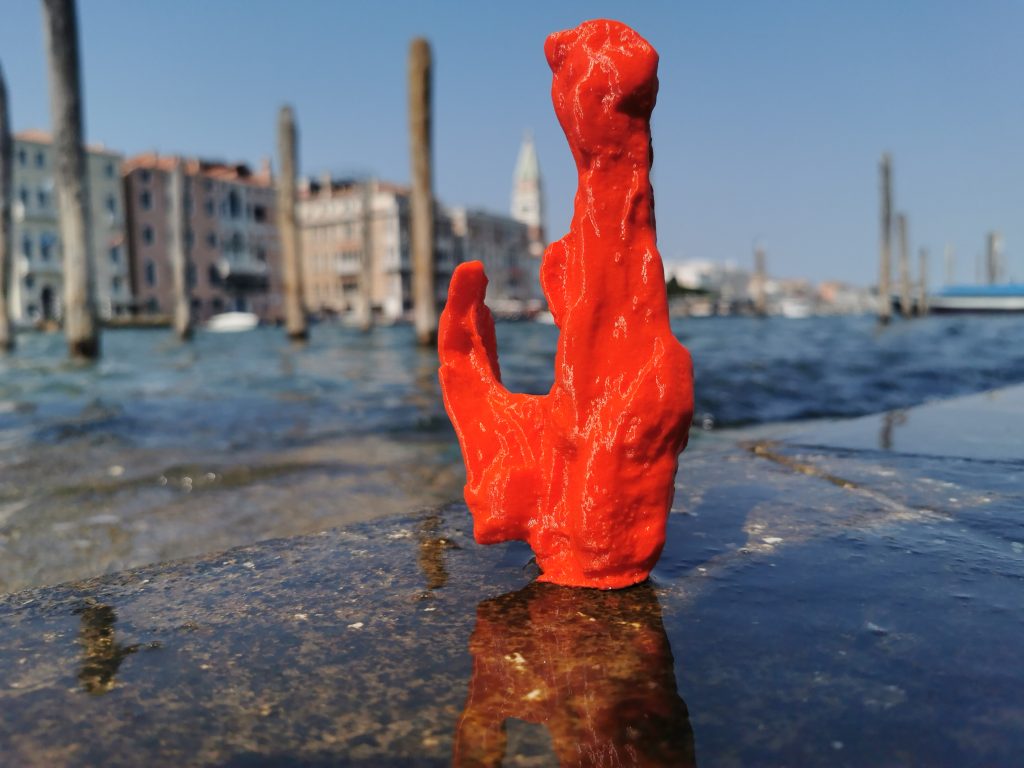 Alligator Dreams in Venice
We propose creating a series of alligator dreams that will float on the water in Venice made from eco – friendly recycled materials. The sculptures will be made of wood from fallen trees and recycled marine floats gathered from Lake Constance in southern Germany, where Zazo lives and works. Together, we will construct a series of alligator forms that slowly rise out of the canals, like a threat or warning of how human activities impact the natural world. We envision arranging the Alligator Dreams in a circle or semi-circle inspired by prehistoric stone monoliths that is gradually emerging from the depths. Alligators are ancient, they have survived many of Earth’s changes over the eons. We ask, what are their dreams? Is it a nightmare or a warning of what the future holds for all creatures who live on Earth? The ancient alligator represents both the strength and resilience of the natural world and the threat emerging from our world’s oceans.

Alligator Dreams Monument
We envision creating a 3M (9ft) Alligator Dream made of cast iron. We will enlarge the original form and cast it in order to outlast our lives, like the alligator itself. The Alligator Dreams monument takes a fleeting moment and captures it in iron.
The forms you see in the accompanying images is directly cast from a piece of driftwood that floated into Tordella’s path in the Battenkill River during the salem2salem residency in 2019. The form is attractive, alluring, and natural, in addition to an abstract shape of an alligator’s head. We have since made multiple castings of the wood original in wax and then iron as well as 3D scans and digital prints.
We propose enlarging the original form and casting a dominant, cast iron Alligator Dream to represent strength, resilience, and our shared dreams of the past and future.

Who are we?
TORDELLA
Kristen Tordella-Williams is an Associate Professor of Art at Millsaps College in Jackson, Mississippi. She has shown nationally and internationally, most recently in a monastery and castle in Salem Germany. Kristen is interested in the layers of the impressions left by our bodies on the environment around us and the reciprocal impressions our bodies hold from the wear and tear of living. She re-interprets the remnants of labor, identity, gender, and memory, discovered or made and is inspired by processes such as performance, papermaking, sculpture or printmaking as well as materials commonly found in hardware stores, scrap yards, and recycling bins. She is currently the Vice-President of the Mid-South Sculpture Alliance, a membership based professional organization advancing the art of sculpture across the Southeast United States.
ZAZO
Susanne Hackenbracht is a steel sculptor and painter born 1967 in Brannenburg, Germany. She has been a freelance artist since 1998 and is the co-founder of the sculpture park project “Neue Kunst am Ried” in Wald, Hohenzollern.
“In Susanne Hackebrachts work every now and again elementary forms appear – like circles, semicircles, rectangles or cylinders. They seem to be like a concealed vocabulary, some sort of hidden system of notation that has to be read and decoded. Besides these forms, she often deals with the substance she uses in an elementary way. Steel, concrete, iron, glass and oil-based paint meet the observer often in a raw and visible materiality. This immediate treatment of the material – the forming out of the formless – is crucial to her work. The boundaries between wilfull pieces and coincidently made ones often become blurred. The spectre ranges as far as the appearance of the material as amorphous mass to precisely crafted geometrical forms. In the work of Susanne Hackenbracht these extremes aren’t mutually exclusive. Further the geometrical vocabulary provides a distancing perspective in the otherwise often intuitively and immediate appearing work.”
– Katharina Wetzel, Art Historian
Tordella (left) and Zazo (right) with several of the first Alligator Dream waxes at Salem Artworks in 2019 in Salem, N